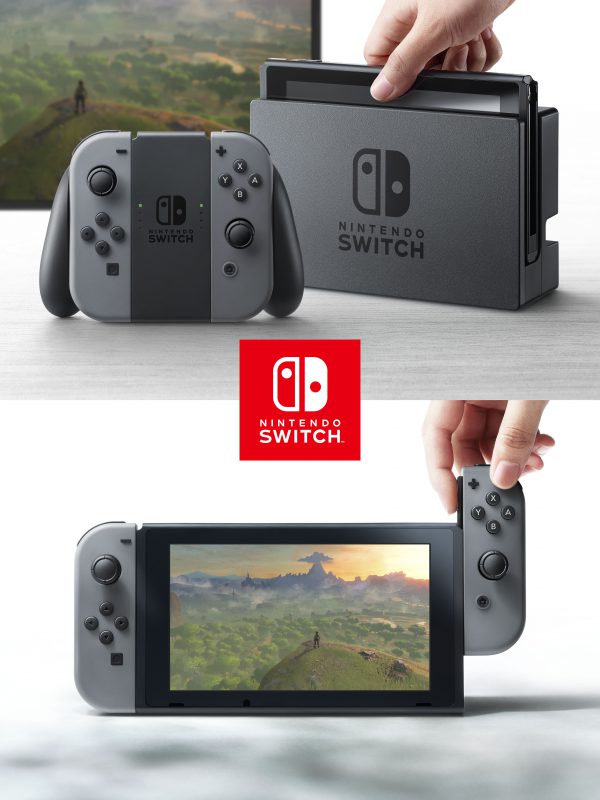 Nintendo’s next console is a combination of its home and portable platforms. (Image by Nintendo)

Following months of speculation, Nintendo revealed the first details about its next console hardware, which it calls the Nintendo Switch, in a trailer video released on Thursday.

The Switch combines Nintendo’s two platforms, its longstanding home console and portable output, into one device, acting as an on-the-go system with detachable controllers for local multiplayer that can also connect to televisions for a traditional gaming experience.

The Nintendo Switch is scheduled to launch worldwide in March 2017. The console’s price and launch games weren’t announced. Code-named the “NX” since March 2015 after being initially confirmed to be in development by the company, Nintendo first announced the 2017 launch date back in April.

During the announcement video that lasted over three minutes, Nintendo showed how the Switch looks and operates, giving glimpses into the vision of its future hardware that combines the company’s game library into a single platform.

The successor to the Wii U console will have an LCD screen for its portable side that acts as the main power output of the Switch. When connected to a television the portable device is inserted a docking station called the Nintendo Switch Dock, allowing games to be played from the home console perspective. The Switch Dock also powers the console and charges it for the portable mode. Nintendo didn’t announce if the Switch features a touchscreen or stylus accessory like the DS, 3DS and Wii U tablet controller all have.

Nvidia confirmed that the Switch’s hardware is using a customized Tegra processor, based on chips commonly seen in other mobile devices like smartphones, tablets and Nvidia’s own Shield systems. The console’s processor will include a GPU created with similar architecture to high-end Ge-Force graphic cards, according to Nvidia.

The two detachable controllers for the portable hardware, called the “Joy-Con” controllers, come in a left and right stick that feature separate button configurations, which can be removed from the console for a single person to use or multiple friends to play with. These can also be connected to a “Joy-Con Grip” accessory when playing Switch games on a TV for a full controller experience. The Switch will also come with kickstands to place the portable device on surfaces in an upright position.

Players will be able to join multiplayer together just from the Switch’s handheld LCD screen by sharing each side of the Joy-Con controller or using different “L” and “R” combinations of the Joy-Con from other Switch owners.. The reveal video also showed split-screen gaming on the LCD device and multiple Switch portable consoles in close proximity playing together. There will also be a Switch Pro Controller featuring a traditional design with analog sticks and a button layout similar to the PlayStation 4 or Xbox One.

Instead of using Blu-Ray or DVD discs for its physical games, the Switch will use cartridges inserted into the handheld side of the machine called GameCards, which are similar in style to the Nintendo 3DS line of software.

On Wednesday Nintendo posted a teaser of the Switch’s announcement on Twitter with an image of Mario peaking through curtains in anticipation. The Switch had been rumored for months to merge Nintendo’s home console and portable development into one platform.

The Switch will also continue to support amiibo figures and its features, Nintendo confirmed to IGN, which the company started in 2014 on the Wii U and 3DS.

Some of the confirmed games for the Switch include the next title in The Legend of Zelda franchise called Breath of the Wild, which was revealed at E3 in June. Breath of the Wild is scheduled to release next year for the console and the Wii U.

Bethesda’s The Elder Scrolls V: Skyrim was shown to be playable on the Switch, marking the first time the publisher has worked with the Japanese company to release its major franchises on a Nintendo platform. While Bethesda didn’t confirm that Skyrim would release on the Switch, it said the footage showed the partnership between the two companies.

The console is also rumored to be region free, allowing games from other countries to be played in any territory without any restrictions.

There will be an all-new Mario game for the console, as briefly shown during the Switch reveal video. The trailer also showed games like Splatoon, Mario Kart and NBA 2K being played in multiplayer modes.

Dragon Quest X and XI are two other games in plans to release for the Switch. Another rumored game for the Switch is the sequel to Ubisoft’s Beyond Good and Evil (2003), which was announced on Oct. 6 to be in development with Michel Ancel, the series’ original director.

Nintendo plans to possibly discontinue production of its struggling Wii U console by the end of the year, which launched in November 2012 and only sold 13.02 million worldwide as of June 30. The Nintendo 3DS first launched in March 2011 has sold close to 60 million worldwide.

Watch the reveal video for the Nintendo Switch: