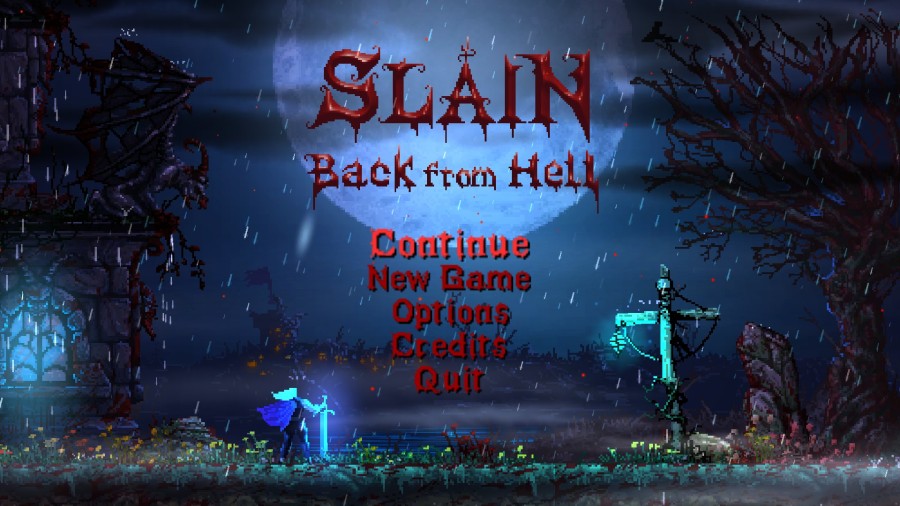 The heavy metal-inspired Slain! is rebranded in an update that overhauls the original release after a poor launch plagued with numerous problems.

Slain: Back from Hell is the game’s titled reboot with its major 2.0 patch that launched for PC on Monday. The free update brings Slain! to the original vision it was intended to be according to the current team, following months of continuous work to fix all its issues.

Slain! stars a viking warrior named Bathoryn in a hack-and-slash, platformer game that’s a homage to titles like Golden Axe, Altered Beast and others of that era. The game world is filled with metal and gothic backgrounds created with pixel artwork similar to the 16-bit days. On top of all that is the Slain! soundtrack done by Curt Victor Bryant, formerly a member of the metal band “Celtic Frost.”

Slain! first released on March 24 from the former two-man studio of Wolfbrew Games and Digerati Distribution. The game had a laundry list of problems at launch that caused many to label it unfinished.

Some of the issues included delayed responses to attacks and jumping, uneven (and sometimes missing) sound effects between the game and its music, controller inputs not working, cheap deaths from enemies and a lack of checkpoints and save statuses. There were also a lot of bugs and even Achievements not unlocking for anyone. Many felt the studio released Slain! too early, with users leaving negative reviews on its Steam Page.

Now over four months later, the Back from Hell update revamps most of the original release with many changes, essentially making it close to an all-new game. The feel and movements of the main character’s actions are more fluid and responsive. Slain’s sound has been nearly fully remixed and improved with more effects and clearer audio levels. The difficulty level is now adjusted, with checkpoints also saving progress at more efficient periods. Other gameplay changes feature new enemy patterns with upgraded AI, better hit detection in combat and control over the character’s jump height. A new tutorial has also been added to teach players the game.

Slain’s story has been improved with more details and background knowledge, which was a big complaint of the first launch. The text dialogue used in cut-scenes is now completely redone with better wording and is visually easier to read. The patch added new game options like a CRT scan-line look for retro visuals. There are also new audio tracks composed by Bryant that will be included in the upcoming weeks.

The update adds new in-game content, with a total of six more enemies and three bosses over the initial launch, including putting in a final encounter for the end game. New offensive and defensive attacks were added to Bathoryn’s arsenal. The patch also increased the game’s total Achievements from 14 to 30.

The Back from Hell update will come to the Mac and Linux versions shortly, which the team estimated will be patched in about a week.

Anyone who bought Slain! through Steam, GOG and Humble Bundle before the update will receive a free copy to give to someone. The game regularly costs $12.99 or a little over $19.99 for a deluxe edition that includes the soundtrack, a wallpaper, a postcard and other artwork.

The developers were continuously patching the game and giving the community updates over the last several months, even creating a new team to help fix its massive problems. Slain! originally went to Kickstarter in February 2015 to help finish the game’s development, gaining over $19,000 from backers. The game’s release date had already been pushed back a few times leading up to its March launch.

Even nearing the release date there were still glaring issues with the game and its internal development, according to the publisher. Digerati and the studio decided to release Slain! in March and then patch the issues later instead of delaying it further. As feedback came in detailing all the game’s huge problems, the team began working on updates to fix almost every aspect of Slain!

Asa Dang, the game’s original lead programmer, was no longer with the project after its release. Wolfbrew Games then was left with only its lead artist and designer Andrew Gilmour. Starting in April a new team was put together outside of the Wolfbrew label that included a new programmer to redo the entire game’s code, veteran composer Barry Leitch to work on the game’s audio and play-testers to iron out all the bugs, with Gilmour remaining as the project lead.

Console versions on the PlayStation 4, Xbox One, Wii U and PlayStation Vita were originally planned before the game’s launch and are still intended to release in the future.

Watch the trailer for the Back from Hell relaunch:

One Response to “Slain! Relaunched With Back from Hell Update”