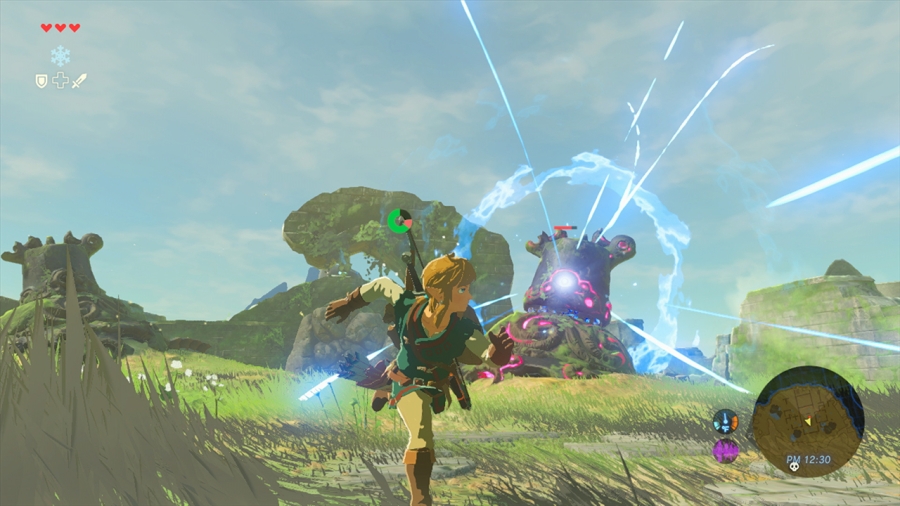 The new Legend of Zelda is the biggest adventure in the franchise yet.

The next Legend of Zelda game will be subtitled Breath of the Wild, Nintendo revealed at E3 on Tuesday.

The game will launch in 2017 for both the Wii U and NX at the same time. Nintendo showed several hours of game footage during its live Treehouse demo event from the E3 show floor in Los Angeles.

Breath of the Wild features a large and expansive open world in Hyrule, bigger than any other Zelda game before. Players have the freedom to take Link wherever they want and play the game in their own style.

Breath of the Wild has many new role-playing and survival elements for this new open world environment. The Sheikah Slate is the game’s main tool that Link discovers, which is a tablet-like device that players can use to see the world map, their inventory and craft new items. The Sheikah Slate will be used a lot during gameplay to interact with the environment and can also be upgraded to gain more abilities like bombs and new magical powers. Weapons can be taken from enemies to replace Link’s swords, axes, bows and a wide variety of other combat tools, which will break over time. Enemies fight in groups and even have their own camps around the world. Link can change his appearance by equipping new clothes, which also gives him protection from enemies and the weather.

Instead of finding hearts throughout the world like in previous Zelda games, Link can hunt animals, gather food and cook meals from recipes to regain lost health and get environmental resistance. Link can even chop trees for supplies. Like the new health system change, rupees are now earned by selling items found throughout the world instead of cutting grass and bushes for them.

For the first time the player will be able to make Link jump on command in Breath of the Wild. There’s a stamina meter for Link’s energy in actions like running, swimming, climbing and pushing heavy objects. If the stamina meter runs out Link will die. Link can climb trees, up towers, over mountains and many other obstacles in the world. A new stealth mechanic lets Link sneak up on enemies for silent attacks. Link will be able to ride a horse to travel with speed, use a glider to fly over long distances and even snowboard down slopes. Players will be able to mark their own objectives and places of interest on the world map.

There will be over 100 Shrines of Trials to take on that include various puzzles and combat scenarios, in addition to the game’s larger dungeons always featured in previous games. Breath of the Wild has different settings like grassy fields, snowy mountains and dry deserts. The world’s weather can change, causing rainstorms and fierce winds to come down on Link. The weather can also affect gameplay and Link’s actions, like having his health drained, starting fires more easily or even being struck by lightning from carrying a metal weapon. The game features a day and night cycle that changes the landscape.

There isn’t constant music playing in the world as Link moves through it. Instead Breath of the Wild will feature many sounds from nature and other ambient noises in the environment. There will be more voice acting for other characters but Link will remain quiet.

Nintendo said the playable E3 demo on the show floor represents only one percent of the total world players can discover in the full game. Breath of the Wild’s world will be 12 times bigger than Twilight Princess (2006), according to Nintendo.

Despite the rumors, Link won’t be playable as a girl in Breath of the Wild but instead Princess Zelda is the game’s main female character. This decision was made because playing as a woman wouldn’t fit Link’s identity and the franchise’s Triforce themes, according to the series’ longtime producer Eiji Aonuma.

Breath of the Wild’s director is Hidemaro Fujibayashi, who also directed Zelda games like The Minish Cap (2004) and Skyward Sword (2011).

The game’s subtitle was chosen to showcase the new design for the world of Zelda, according to Aonuma. Nintendo compared Breath of the Wild’s expansive openness and exploration to the design of the original Legend of Zelda on the NES, which gave a new sense of freedom and imagination in how people played. Breath of the Wild even allows the player to challenge the final boss and beat the game right from its beginning, Aonuma told Polygon.

Nintendo also announced there will be three new amiibo figures based on Breath of the Wild to connect to the game. Two of the amiibos will be variations of Link and the third is a “guardian” creature that features flexible parts.

Watch the new gameplay trailer for Breath of the Wild:

One Response to “The Legend of Zelda: Breath of the Wild is a Massive Open World Adventure”