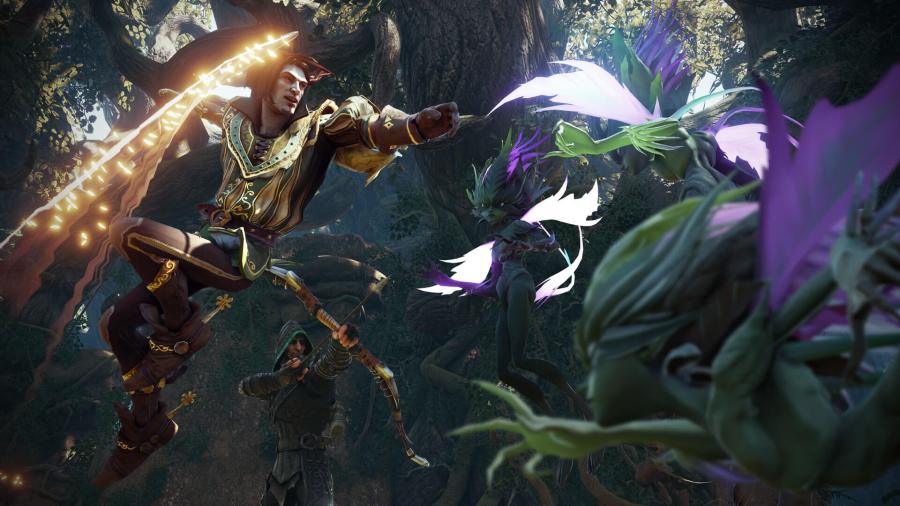 After nearing a potential release, Fable Legends has been canceled. (Image by Microsoft)

Fable Legends, an upcoming multiplayer-themed game for Xbox One and Windows 10, is being canceled and two of Microsoft’s first-party studios in Europe will be shut down, the company announced on Monday.

Lionhead Studios, the U.K. team behind Fable Legends, is being closed by Microsoft.

The other company facing closure is Press Play, a Danish studio that developed the platformer Max: The Curse of Brotherhood, which first released in December 2013 for the Xbox One. Press Play’s current work in development, a multiplayer survival game codenamed Project: Knoxville, has also been canceled.

“These have been tough decisions and we have not made them lightly, nor are they a reflection on these development teams-we are incredibly fortunate to have the talent, creativity and commitment of the people at these studios,” Lemke said.

The official reason give by Microsoft for the two closures and game cancellations is to move its focus to other titles that appeal more to its audience.

“These changes are taking effect as Microsoft Studios continues to focus its investment and development on the games and franchises that fans find most exciting and want to play,” Lemke said.

Due to laws in the U.K., Microsoft is currently in talks with Lionhead to formally close the company instead of it shutting down immediately. During this consultation period there’s extended time for an employer to explore other options that don’t result in a closure or help its employees find other work and offer retraining. In today’s statement Lemke said Microsoft would also work with both companies to possibly move its employees to other opportunities within Xbox or other developers.

Both studios appeared to be unaware of the upcoming closures, as members of each company were engaging communities on social media and their official forums about Fable Legends and other games as recently as this past weekend.

Players already part of the ongoing Fable Legends closed beta can still access the game through April 13, according to Lionhead. No new players will be accepted into the beta. After that date the game will permanently end. Anyone who purchased gold through the in-game bank will be refunded.

Fable Legends was first announced in August 2013 as an Xbox One-exclusive set in the Fable universe. During its development the game went through several changes, eventually becoming a free-to-play, online multiplayer release focused on cooperative gameplay. The game was to be supported by micro-transactions. Legends combined the franchise’s action role-playing with MOBA elements and real-time strategy mechanics. In gameplay four heroes from different classes team up against one villain who has the ability to change a stage’s environment by commanding monsters and setting traps against them. The game had been in development since 2012.

In January 2015 Microsoft announced Fable Legends would also launch exclusively on Windows 10 with cross-play between the two systems, one of the first games originally part of the company’s plan to unite the Xbox and Windows 10 platforms.

Fable Legends was supposed to have an open beta later this spring after already doing extended closed beta sessions since October 2014. This open beta has now been cancelled. Lionhead Studios had delayed the game’s release last December, with its latest scheduled launch date pushed from late 2015 into this year. Lionhead was planning on Fable Legends having up to a 10-year lifespan.

Lionhead Studios opened in 1996, an independent company co-founded and formerly run by Peter Molyneux. The studio was known for developing the Black & White god simulator franchise that started on PC in 2001 before collaborating with its partner Big Blue Box Studios on Fable for the original Xbox in 2004. Fable is a role-playing series where good and evil moral choices impact the story, gameplay and development of the playable main character. Lionhead also made The Movies, a 2005 management simulation game about running a film company that became one of its more popular releases.

The company was acquired by Microsoft in April 2006 and developed two sequels to the fantasy-themed Fable franchise in 2008 and 2010 for the Xbox 360. Molyneux left the company in early 2012 to form a new studio called 22Cans, which is currently developing Godus, another game in the god genre. Lionhead also made two spin-offs in the series called Fable Heroes, a four-player beat ’em up released in May 2012 on the Xbox Live Arcade and Fable: The Journey, an on-rails, action-RPG exclusively for the Kinect on Xbox 360 in October 2012. The studio’s last released game was Fable: Anniversary, a high-definition remaster of the original game for Xbox 360 and PC in 2014.

Press Play was founded in 2006 and acquired by Microsoft in June 2012. The studio was based in Copenhagen, Denmark’s capital city. Its last game was Kalimba, a downloadable puzzle platformer for Xbox One released in December 2014. Max: The Curse of Brotherhood is a platformer that the studio also released for the PC and Xbox 360 in May 2014. Project: Knoxville was a game voted by the community last summer as Press Play’s next project where fans would also shape its development.

With these two announced closures, Microsoft Studio’s remaining first-party studios include 343 Industries and the Halo franchise, The Coalition with the upcoming Gears of War 4, Turn 10 Studios and Forza, Rare with Sea of Thieves, Mojand with Minecraft and Twisted Pixel Games, known for the ‘Splosion Man series.

One Response to “Fable Legends Canceled, Lionhead Studios and Press Play Being Shut Down”