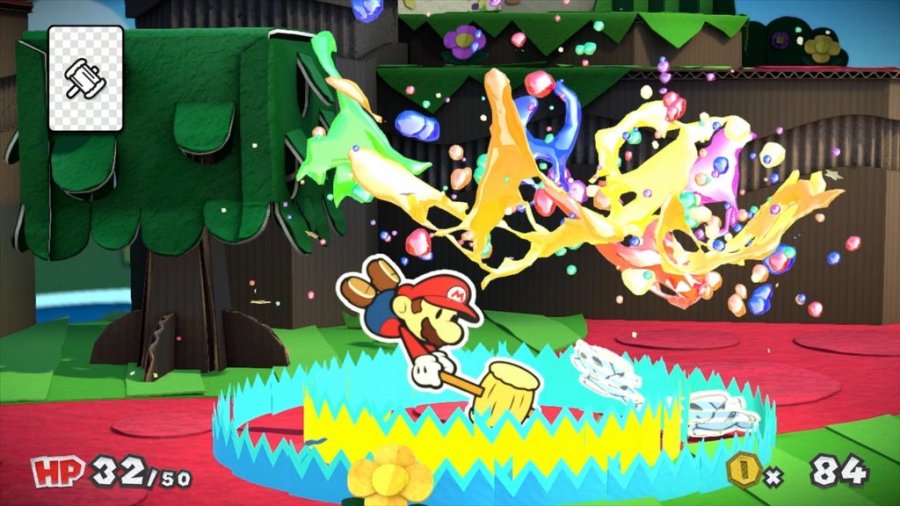 The next Paper Mario will paint its way to Nintendo’s home console this year.

Paper Mario: Color Splash was officially revealed for the Wii U during the latest Nintendo Direct on Thursday.

Color Splash will release in 2016. An official date wasn’t announced.

In Color Splash Mario can paint the world of Prism Island, a place that for mysterious reasons has become dull and lacking its color. Mario uses a new Paint Hammer to bring color back to the island and revive its inhabitants like Toads. Mario might be going solo in Color Splash as it wasn’t revealed if he will have party members with him throughout the game.

Color Splash looks to incorporate some gameplay elements of Sticker Star, the last release in the series. During battles players can create paint cards and use these against enemies by swiping them on the GamePad screen. There will also be cards that Mario uses for special attacks.

While the Paper Mario franchise started out as role-playing games, Bill Trinen, the senior product marketing manager at Nintendo of America, categorized Color Splash and the series as the company challenging itself to “bring something fresh to the action-adventure genre.”

This latest Paper Mario is most likely developed by Intelligent Systems, a Japanese studio with a long history of creating games for Nintendo that has made every release in the series.

The first Paper Mario game released in February 2001 for North America on the Nintendo 64. The most recent game in the series is Paper Mario: Sticker Star that released on the 3DS in November 2012. There hasn’t been a Paper Mario game on a Nintendo home console in nine years, since Super Paper Mario in 2007 for the Wii.

Watch the reveal and some gameplay for Color Splash:

One Response to “Paper Mario: Color Splash Announced for Wii U”