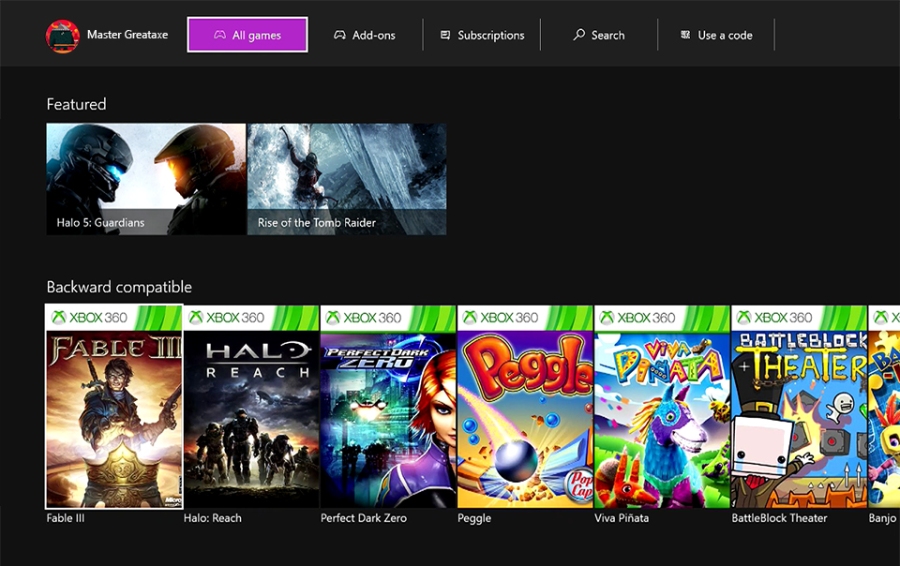 More unified backwards compatibility is happening on Xbox One.

Soon all Xbox One owners will be able to buy Xbox 360 games straight from their console, Microsoft revealed on Tuesday.

In an upcoming system update, Xbox 360 games that are playable on Xbox One through backwards compatibility will be able to be bought directly from the console’s digital store. Previously the only ways to purchase these games were from the official Xbox website or through an Xbox 360 console.

This console update and feature are currently in beta testing starting Tuesday for Xbox Preview members. A public release for every Xbox One owner will launch soon.

[Update: 3/05/16: Buying Xbox 360 games for Preview members has been delayed until next week because of an issue found before the feature’s beta release, according to Mike Ybarra, the director of program management for Xbox and Windows at Microsoft.]

Microsoft and other publishers are now adding more backwards compatible titles to Xbox One as soon as they are ready instead of releasing them at certain times every month. Backwards compatible games are automatically added to a user’s digital library on the Xbox One if they were previously owned and are able to be downloaded to the console. Both retail and digital versions of Xbox 360 games are playable on Xbox One. Microsoft announced the backwards compatibility feature last June at E3, with the ability added for all users through the Xbox One dashboard redesign update in November.

There are more than 130 Xbox 360 games currently available to play on Xbox One, with the first big batch adding 104 games last November. The latest games added are Carcassonne (2007) and Geometry Wars: Retro Evolved (2005), both Xbox Live Arcade titles. Recent retail titles that are now backwards compatible include games like The Witcher 2: Assassin’s of Kings (2012). EA Access, the subscription service from Electronic Arts that lets users play new and old games from its library on Xbox One, added the original Plants vs. Zombies (2010) on Monday, the first Xbox 360 game to be included.

Microsoft plans to continue focusing on backwards compatibility as it moves forward in unifying its Xbox brand with Windows 10 into stronger platforms running Universal Windows Applications that work across PCs and Xbox consoles. In the future Xbox One and new Xbox consoles might see hardware updates that allow people to upgrade to a more powerful system or still play the latest games on their current console, much like a PC. Users will be able to bring their Xbox game libraries over to new hardware releases and still be able to play them, instead of being restricted to a certain platform.

Other new features part of this latest firmware update include an increased 16-person party chat, party chat in Twitch broadcasts, Achievements listed in the Xbox One guide, extended Game DVR length options and Xbox 360 Achievements appearing in the social Activity Feeds on Xbox One and Windows 10. Xbox Preview members can try out these features and others by downloading the update.

Watch this video of the latest improvements coming to Xbox One: