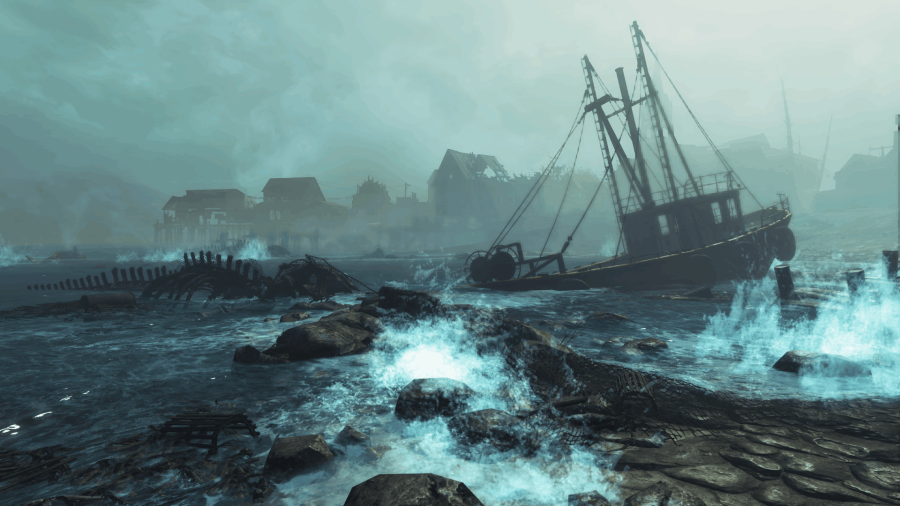 A look at the setting for Far Harbor, one of the upcoming Fallout 4 expansions. (Image by Bethesda Softworks)

The first three downloadable add-ons for Fallout 4 will release this spring with the Season Pass price going up alongside them, Bethesda Softworks announced on Tuesday.

The first add-on, Automatron, will release in March and cost $9.99. Robots are set loose in the Commonwealth by the Mechanist, one of them being the evil Robobrain. By finding and destroying them, players can use the parts to create custom robot partners and hundreds of mods for them, like a new weapon called the lightning chain gun.

The second DLC is called the Wasteland Workshop and will cost $4.99 when it releases in April. Players can create cages to capture creatures like Deathclaws and other people around the Commonwealth. Once they’re captured you can have them fight each other or other settlers. Wasteland Workshop also adds more new items for settlement building like taxidermy, letter kits and lighting options.

The third add-on comes out in May and is a big expansion called Far Harbor that will cost $24.99. This story DLC takes place in Maine, outside of where the core game is set in Boston. The Valentine Detective Agency takes a case to find a missing woman and a mysterious synth colony. The coast of Maine has increased radiation levels that created more feral beings and attracts the Children of Atom into a conflict with the synths and nearby settlers. Far Harbor will feature the largest new area created by Bethesda Game Studios for an add-on, according to the publisher. It will also bring new settlements, faction missions, creatures, dungeons and stronger level armor and weapons.

All three add-ons are included in the game’s Season Pass, which released alongside Fallout 4 last November. Bethesda announced it’s raising the price of the Season Pass from $29.99 to $49.99 on March 1 because of the scope of the planned DLC. Anyone who already bought the Season Pass or gets it before the price increase will still receive all the upcoming content at no extra cost.

Bethesda also said it’s planning additional content for Fallout 4 throughout the year, with at least more than $60 worth of new add-ons that includes the current announced prices.

There will be a closed beta for all of the three expansions on PC and consoles. Those that get accepted into the beta after signing up with a Bethesda account won’t have to buy the DLC and get to keep that add-on for free. The beta includes the full retail versions of the DLC with Achievements and Trophies.

The studio is still working on the Creation Kit, the previously announced free modding toolset. The Creation Kit will also bring PC-created content to console platforms, with Xbox One getting the mods first. Current content like Survival Mode, the game’s hardest difficulty setting, will be getting revamped in a way that will change how players confront the challenge, according to Bethesda. There will also be continued free patches and updates to the core game.