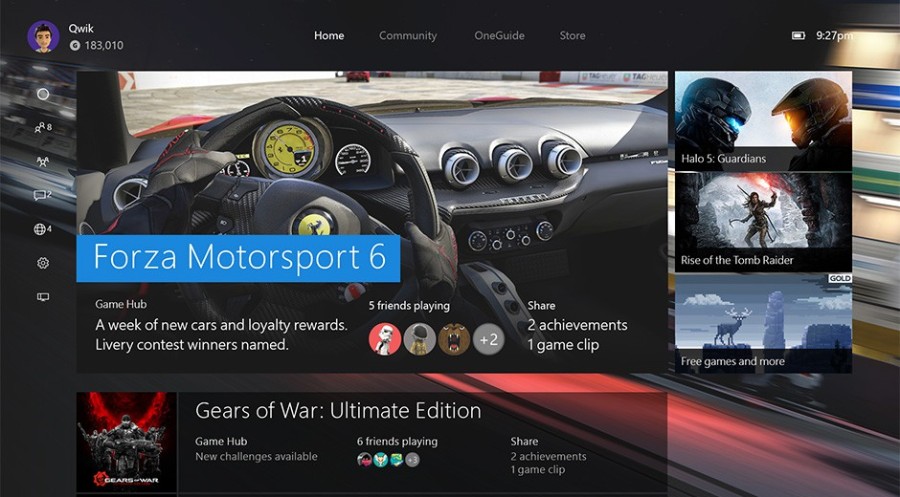 The new home menu for the Xbox One. (Image by Microsoft)

The new Xbox One user interface built on Windows 10 and backwards compatibility with Xbox 360 games will both launch in two weeks, Microsoft announced on Monday.

The major Xbox One update called “The New Xbox One Experience” will release on Nov. 12 for all console owners. This update redesigns the look and use of the console’s dashboard menus while improving its speed and performance by running on the Windows 10 operating system.

The current dashboard is based on Microsoft’s Windows 8 system and design, which the console has used since its launch in November 2013. The menus were intended to be interacted with by using the Kinect device. The new dashboard has a controller focus for the console and will be integrated with Windows 10 on Microsoft’s other platforms. The dashboard has been in beta testing since September for limited users as part of the Xbox’s Preview program.

The new interface also adds a guide menu option by pressing the Xbox button or left on the controller pad while in-game or on the home dashboard. It will bring up a user’s friends list, party options, messages and access to quick settings without disrupting gameplay.

This revision also puts more focus on Xbox One’s social features. Game Hubs are the new center for each game community. Users can join and follow communities, get updates from developers and look at their Achievements or compare them with friends. The Community area shows what your friends and other Xbox One owners have been up to recently along with their shared user content. The update also brings back player Avatars, which started on the Xbox 360 in November 2008 but didn’t transition over to the Xbox One.

The Store is also redesigned to find content easier. Content is split into four areas of media ranging from games to music, with extra categories like new releases, staff picks and top played. The new OneGuide section will be the designated area for video content like television shows, movies and other clips.

Backwards compatibility with Xbox 360 games for all Xbox One owners is also releasing with the dashboard update on the same day, with more than 100 of the console’s physical and digital library playable on the system. Games like Gears of War (2006), Mass Effect (2007), Viva Pinata (2006) and Super Meatboy (2010) will all be playable on Xbox One consoles.

Microsoft announced backwards compatibility in June at its E3 conference. Hundreds of more games will be added in the future based on publisher and developer acceptance into the program as well as fan demand. Backwards compatibility has also been in beta testing for Preview members since June.

Xbox One features like game streaming, taking screenshots and DVR recording footage can also be used with Xbox 360 games. Xbox One owners can also play online multiplayer with Xbox 360 users.

Some new Xbox One releases will even come with free Xbox 360 games. Titles like Fallout 4 releasing on Nov. 10 are bundled with a free digital copy of Fallout 3, which launched in November 2008. Just Cause 3 out on Dec. 1 comes with a free copy of Just Cause 2 (2010).

The Xbox brand also has additional Windows 10 integration with the ability to stream Xbox One and soon Xbox 360 games from the console to PCs and tablets. The Cortana voice command assistant feature on Xbox One originally planned for this November update will be added in 2016.

Watch this video to see the redesigned Xbox One dashboard and some of its new features: