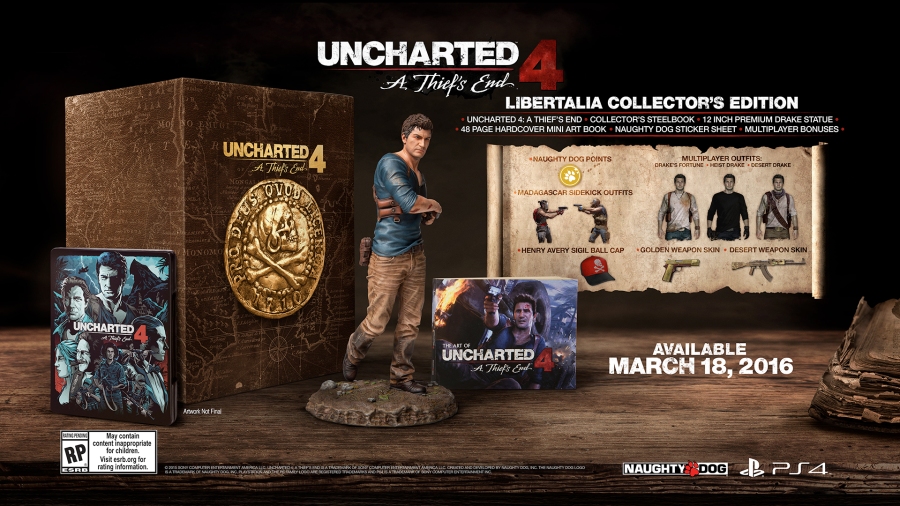 One of the three special editions for Uncharted 4. (Image by SCE)

After a long delay, the spring release date for Uncharted 4 is finalized.

Uncharted 4: A Thief’s End will launch for the PlayStation 4 on March 18, 2016, Sony Computer Entertainment announced on Monday.

The company also announced the game would have three special editions, soon available for pre-order. The three versions are the Uncharted 4: A Thief’s End Special Edition, the Libertalia Collector’s Edition and a Digital Deluxe Edition.

The Libertalia Collector’s Edition comes with all the content in the Special Edition plus a 12 inch Nathan Drake statue made by Gentle Giant, three online mulitplayer costumes for Drake like the Heist, Desert and outfit from Uncharted: Drake’s Fortune (2007), Madagascar Sidekick outfits, the Golden and Desert weapon skins, and an in-game Henry Avery Sigil ball cap. It will retail for $119.99.

Uncharted 4 will also receive a Digital Deluxe Edition for the downloadable version from the PlayStation Store. It will be up for pre-order later this week and costs $79.99. The Digital Deluxe Edition comes with a voucher for two multiplayer add-on packs that include more rare and legendary items, according to Sony. The special digital version also unlocks two customization items for the online multiplayer.

For the first time ever, the Uncharted series will get post-game downloadable story content. This add-on will be included in the Digital Deluxe Edition. A release date or additional details for the single-player content weren’t announced. The three pieces of content called the “Triple Pack” included in the Digital Deluxe Edition will also be sold separately as an add-on.

Pre-orders for all physical and digital versions of the game get access to the Uncharted: Drake’s Fortune multiplayer costume, a Naughty Dog Points pack and the Golden Weapon multiplayer skin.

Anyone who already pre-ordered Uncharted 4 on the PSN Store can upgrade to the Deluxe Edition for $20 more.

There will also be retailer-specific pre-order bonuses at GameStop, Amazon and the PlayStation Store that unlock customization items for the online multiplayer. The PSN pre-order also comes with an Uncharted 4 Dynamic Theme for the console.

Uncharted 4 was originally scheduled to release in 2015 but was delayed by Naughty Dog in March until next spring to improve the game’s development. A Thief’s End is the follow-up to 2011’s Uncharted 3: Drake’s Deception on the PlayStation 3.

Naughty Dog isn’t a complete stranger to story DLC for its games. Left Behind is an expansion for 2013’s The Last of Us that first released in February 2014 on the PS3.

Watch extended gameplay footage of Uncharted 4 from E3 this June: