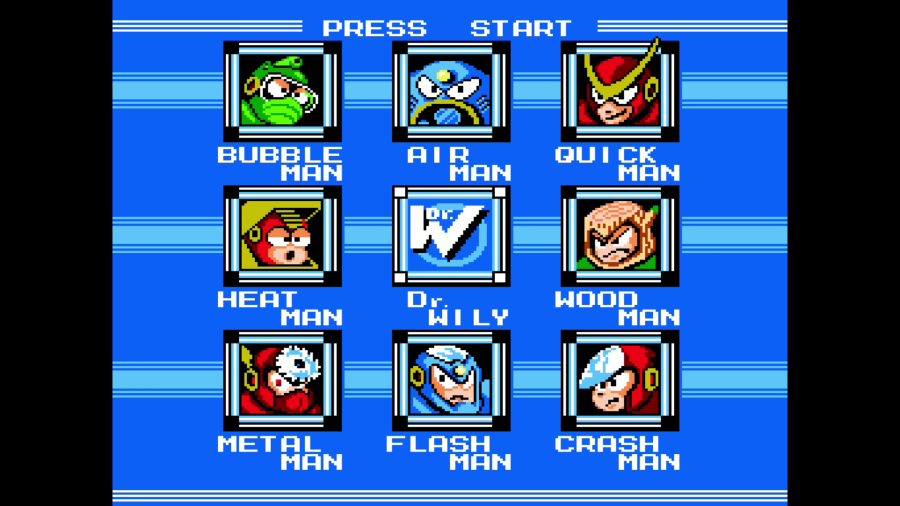 The bosses in Mega Man 2, released in 1989 for North America, is part of the new collection. (Image by Capcom)

Mega Man is making a comeback.

Capcom announced the Mega Man Legacy Collection on Monday, which includes the first six 8-bit games of the series that released on the NES between 1987 to 1994, remastered for current platforms with bonus gameplay and historical content.

The package is coming to PlayStation 4, Xbox One and PC this summer for $14.99 as a digital download. A Nintendo 3DS version will release later this winter. No Wii U version was announced.

All six Mega Man games will be converted to 1080p high-definition graphics using a new game engine while maintaining the accuracy of the 8-bit design and gameplay style from the original NES source.

The Legacy Collection is being developed alongside Digital Eclipse, a recently re-formed game archivist studio and its new Eclipse Engine, which is made to easily preserve the game on current multiple platforms and those in the future.

The game will support both 4:3 and 16:9 aspect ratios, according to Frank Cifaldi, Head of Restoration for Digital Eclipse. The 16:9 ratio is stretched out across the screen instead of being newly redone to show more of the stage.

A Challenge Mode mixes up each Mega Man game for a variety of new objectives, like beating combined stages with only one life bar. The mode will include leaderboards for the best completions. Video replays of completed challenges from the top-ranking players can be watched in-game.

The Legacy Collection includes a Museum Mode showing the history of the franchise through lots of artwork, concept designs and other visuals from each game’s development. While being an interesting addition for new players and long-time fans, this mode is also a way to preserve the franchise’s history, according to Capcom.

Each Mega Man game will also have a detailed database of every enemy type and a practice mode to take them on.

Cifaldi compared this Mega Man release to the Criterion Collection in the film industry, something video games don’t have for preserving important titles.

In addition to Digital Eclipse, Other Ocean Interactive is working on this re-release. Other Ocean has ported games like the Mortal Kombat Arcade Kollection and Castlevania: Symphony of the Night for the Xbox Live Arcade. Recently the studio ported Ultra Street Fighter IV to the PS4 in May.

The Mega Man line of the franchise is up to 10 games. Mega Man 7 released for the Super Nintendo in 1995, and the most recent Mega Man 10 released in March 2010 on the PlayStation 3, Xbox 360 and Nintendo Wii. Mega Man 10 was also the last new Mega Man game released for home consoles.

These six Mega Man Legacy games are also available individually on the Nintendo’s Virtual Console for $4.99 each without any updates, playable on the Wii U, 3DS and Wii. The Mega Man Anniversary Collection released in 2004 for the PlayStation 2, GameCube and Xbox (2005), which bundled ports of the first eight games.

Capcom said it will show more of the Mega Man Legacy Collection at this year’s E3.