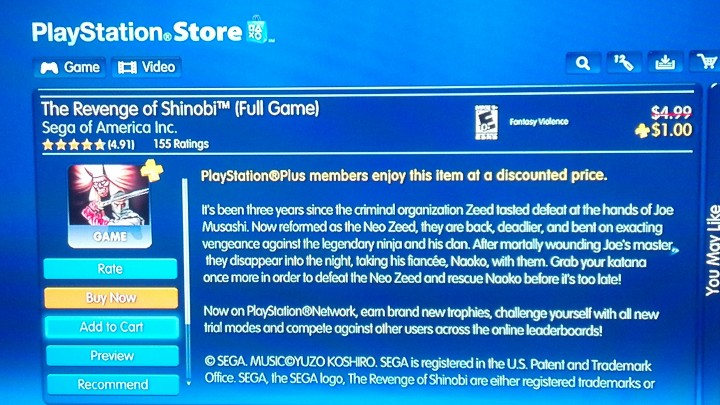 One of the toughest Sega Genesis games is on sale this week for PlayStation Plus subscribers.

Starting today the Sega classic The Revenge of Shinobi is on sale for $1 on the PlayStation 3 exclusively for PS Plus members. This digital version comes with Trophies, online leaderboards, game replays and the ability to save your progress anywhere on the level. In addition all the game’s songs can be played in a “Jukebox” mode. The North American, European or Japanese release of the game can also be chosen for play.

The PlayStation Network version released in May and regularly costs $4.99. Developed by  M2, the game is part of Sega’s Vintage Collection. The Revenge of Shinobi is on sale until Oct. 16.

A sequel to the 1987 Shinobi, the game first released for the Sega Genesis on Dec. 2, 1989. The side-scrolling platformer developed by Sega features a ninja named Joe Musashi who must fight the crime organization called Neo Zeed through eight stages, using special weapons and four different power abilities. The classic is known for its hard difficulty and soundtrack composed by Yuzo Koshiro, who also worked on many other games including the Streets of Rage series, the 1994 RPG Beyond Oasis and Shenmue in 1999.

The Revenge of Shinobi is infamous for having characters like Batman, Spider-Man and Godzilla as bosses that were put in the game despite of copyright restrictions. Several versions of the game exist with varied designs of these popular figures. While Sega eventually got the rights from Marvel to use Spider-Man, he was removed in later digital versions since the license expired. The Spider-Man boss with the same movements was kept in the Wii version of the game and replaced with a pink costume. These earlier copyrighted characters are not in the PS3 version of the game.

PlayStation Plus is a subscription service for PlayStation 3 owners that gives monthly free games, game discounts and cloud storage for save data. The subscription comes in three and 12 month plans. The Revenge of Shinobi is also available for the Xbox 360. A Nintendo Wii version on the Virtual Console released in August 2009.

Watch a sample of the gameplay and enemies you face in The Revenge of Shinobi: