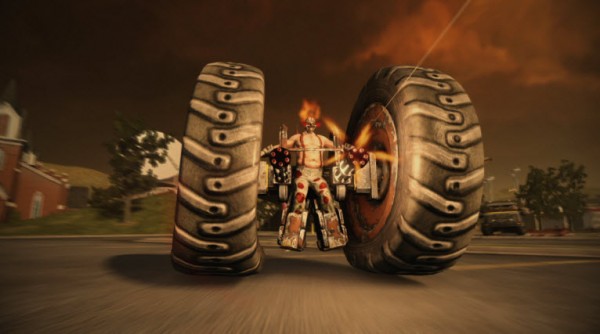 Sweet Tooth and friends invite you along for some multiplayer destruction in the new Twisted Metal.

The latest release in the longest-running PlayStation series features a heavy focus on online multiplayer, but requires an Online Pass before allowing players to spread worldwide chaos.

Twisted Metal, developed by the Salt Lake City-based Eat Sleep Play, released Tuesday exclusively for the PlayStation 3. In order to access the game’s various online modes, players need to redeem an Online Pass that’s included in every new copy of the vehicle combat game. The 12 character voucher code is found on the back of the game’s instruction manual and weighs in at a 100KB download. If someone buys the game used or rents it, they need to buy their own Online Pass to unlock the game’s full multiplayer features. The Pass will be available to download for $9.99 on the PlayStation Network Store.

The game was confirmed to have an Online Pass in January by David Jaffe, co-creator of the franchise and director for Twisted Metal. As soon as the game boots up to the main menu, it immediately asks the player to redeem their Online Pass or buy one from the Store. The Online Pass works for all user accounts on the console, not just the PlayStation Network account it was downloaded to. This means that households with multiplayer players won’t need to buy separate Online Passes. Note: this was tested before publication.

Jaffe had previously said he personally didn’t want the Pass used for the Twisted Metal reboot because it would be a barrier to attracting as many players as possible during the process of trying to rebuild the community and brand. However he said the decision ultimately wasn’t his to make and was a mandate from Sony Computer Entertainment, the game’s publisher and owner of the intellectual property. Sony signed Eat Sleep Play to an exclusive multi-game development deal in July 2007.

Jaffe also candidly suggested those that only wanted to check out the single-player section of Twisted Metal should rent the game, since the release is so multiplayer oriented.

Jaffe announced last week he would be leaving Eat Sleep Play, the company he co-founded, to form a new studio where he lives in San Diego, Calif. He said with the new studio he will be able to return to internal development on future titles, rather than managing them long distance like he did with Twisted Metal. Eat Sleep Play will also be shifting its focus to the development of mobile games on iOS devices. Even though he’s announced his departure, Jaffe assured players that Twisted Metal will receive full online support from its developer in the next several months. He will continue to work with the studio through the end of March on a maintenance contract with Sony to observe and fix any problems that the community might experience.

Watch the video below for an extended trailer of Twisted Metal: