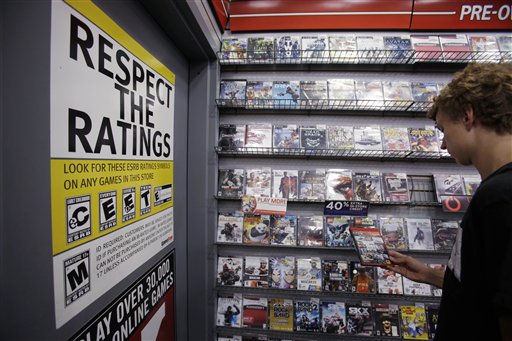 Every year gaming gets better and better. In 2011, the industry saw a massive release of amazing games. Among all of them, there are five that stand out from the rest.

I base this list only on what I’ve completed or played enough to judge, so that’s why games like Batman: Arkham City, Assassin’s Creed: Revelations, Shadows of the Damned, Rayman Origins, Dead Space 2, Zelda: Skyward Sword, and others from this year might not be on the list.

These games may not necessarily be perfect and they each have their own flaws, but they’re my favorite releases of 2011. These are games I will return to years from now and still enjoy sitting on my couch playing them for hours.

Disclaimer: these aren’t the official games of the year for Quarter Disorder.

The sequel to the massively popular 2007 release Portal, Portal 2 makes you feel smart. With the new addition of cooperative play, you and a friend can both feel smart together. I would be stuck on a puzzle forever, and then finally get the solution that was in plain sight. The challenge increased with every new stage, but it never got the point where I had to quit and give up. It was a refreshing difficulty.

The game’s presentation is slick. Playing, setting up the answer to a puzzle and shooting the portals through every wall I could find felt smooth and flawless. Going back to Aperture Science to complete the tests from when the facility first opened decades ago was a cool touch.

The twisted humor is one of the best parts of the game. Portal 2 is legitimately hilarious, which is a rarity in video games. Risen from the garbage heap, GLaDOS gives you a hard time at every chance, trying to crush your spirits with sarcasm and clever wit. Wheatley, your new sidekick, is equally as funny but has a sinister side as well.

Portal 2 passes the test of what makes a great game with ease.

I’ve played Mortal Kombat since the original arcade release in the early ’90s. I’ve been there for every fatality and controversy. For the past several years the Mortal Kombat franchise was in a slump. The last game to do anything noteworthy was Mortal Kombat: Deception (2004). Midway Games went under in 2009, and I wondered if MK would ever reach the level I remembered it for.

In 2011 Mortal Kombat came back with a barrage of blood and guts to reclaim its former glory. The game perfectly blends the nostalgia of the first three classic titles into a modern package of violence for a new generation of players. With no reservation, I say that Mortal Kombat has the best story mode in any fighting game I’ve ever played. It’s actually a real story, not just a basic arcade mode masquerading as one. You get to discover the history behind each character. For once, the Mortal Kombat storyline makes sense. Facing Shao Kahn reminded me of the days when I would spend a bunch of money in quarters at the arcade trying to finally beat Goro.

Unlike other fighters that require you to study for hours just to get your skills to a respectable level, Mortal Kombat is easy to master and actually start racking up wins against other players. It has just the right difficulty level for beginners and veteran players. New players can pick up their controller and lock down a sweet combo. It’s too bad the online (at least on the PS3) multiplayer was a broken, buggy mess for months, because there was a lot potential for online fights.

There’s so much content in the game, from the story mode, to the 300 different missions in the “Challenge Tower,” to the hundreds of unlockables in the “Krypt.” Mortal Kombat is one of the few games to be truly worth the $60 price tag.

Resistance 3 lives and dies by its campaign. With Nathan Hale deceased, Joseph Capelli became the reluctant savior of humanity from the Chimera. The game features one of the best shooter campaigns in the past several years.

Capelli travels through the U.S., desperately trying to get to New York to put a stop to the Chimeran invasion. The end is at hand for the human race, and deep down Capelli knows his mission is doomed to failure. This pessimism is wonderfully thrown on the player. You feel the hopelessness and misery of the situation. Resistance 3 captures all the horrible aspects of this life while showing us the will to persevere is greater than any challenge we could ever face.

Huge, painfully slow to download game updates revealed Resistance 3 needed a few more months of development. The multiplayer was a serious disappointment. Players also never got answers to the series’ big mysteries. Even so, the thrilling and underrated campaign is an incredible highlight among the onslaught of fall shooters like Gears of War 3, Battlefield 3 and Modern Warfare 3.

L.A. Noire is such a unique game. Yes, there’s areas that needed to be improved upon. It doesn’t have the best gameplay mechanics. The combat is clunky. There’s sometimes too many restrictions put on the player. It has something special though.

The amazing emotions shown through the “MotionScan” technology are what sets L.A. Noire apart from every other release this year, and every game ever made period. You won’t look at other games the same way after witnessing it. Regardless of the stiff and unnatural bodies, people in the game actually felt real.

L.A. Noire is a game that allows the player to explore the past. Placed in 1940s America, it’s not 100 percent historically accurate, but L.A. Noire encourages people to discover and learn about the period. The forgotten music, the vintage cars, the tensions among different cultural groups. The world was changing, and people were awakening from their American Dream to realize things weren’t what they seemed.

I played the game in marathon sessions, which I hardly ever do. I wouldn’t stop playing until I was exhausted from sleep deprivation. I loved the characters and their complicated relationships, finding new clues through detective work and grilling a suspect for the truth. Driving around Los Angeles listening to the radio felt like I traveled back in time to 1947. The music makes you depressed, because  instead of Dinah Washington and Louis Jordan, this generation is stuck with Rihanna and Justin Bieber.

L.A. Noire is a glimpse into the future of what games will be capable of and needs to be experienced by anyone with even a slight interest in the medium.

I was never a “Gearhead.” Sure, I enjoyed the Xbox 360 exclusive third-person shooter, but they were never that game for me. I saw the improvement throughout the series though, from the lifeless colors of the first Gears (2006) to the improved storyline and character development in Gears 2 (2008). Gears of War 3 is the best release in the franchise and the one that fully won me over.

The characters were no longer meat-heads but now had depth and reasons for you to care about them. The friendship and brotherhood of Marcus and Dom was the highlight of the game. There was a fine balance between seriousness and humor. An emotional end to Dom’s struggle will make even the most of hardcore of bros shed a few tears. The big battles packed plenty of action. The colorful and refreshing environments were gorgeous, the complete opposite of the original Gears. Having Ice-T voice a character and hearing one of his songs in the ending credits made the game even more awesome.

Like Mortal Kombat, Gears of War 3 is one of the rare releases that’s actually worth the full retail price. Unlocking all the medals and ribbons for the competitive multiplayer and Horde modes will take thousands of hours. Instead of stringing along players for a few more years, Gears 3 wrapped up most of the loose ends and essentially ended the franchise, which you hardly ever see happen with many series. Everything in Gears of War 3 came together to create a fantastic experience. I’m glad I warmed up to the COG.

One Response to “My Five Favorite Games of 2011”