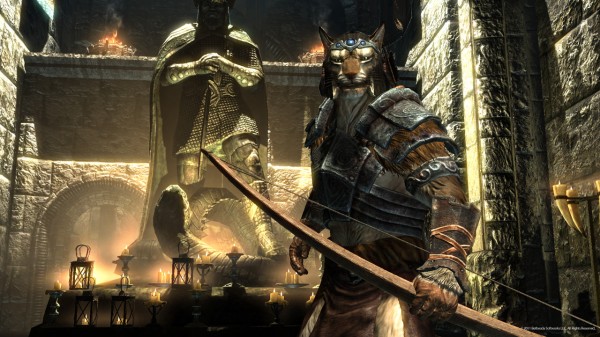 The Elder Scrolls V: Skyrim offers an expansive world filled with hundreds of hours of gameplay.

Skyrim, developed by Bethesda Game Studios, released Nov. 11 for the PlayStation 3, Xbox 360 and PC. Parent company ZeniMax Media Inc. announced Wednesday the sales of the role-playing game. The game’s publisher Bethesda Softworks shipped 7 million copies worldwide to retailers, with 3.5 million of those being sold to players in the first 48 hours of release. Bethesda expects to earn more than $450 million from those shipped units.

Through digital downloads, more than 280,000 copies were bought on Steam on Skyrim’s launch day, setting a record for the platform. There were many midnight launches on Friday at GameStop locations across the U.S., with excited fans filling the stores to get their hands on Skyrim for a long gaming marathon session over that weekend.

While most developers now shy away from single-player only experiences and include multiplayer components to their games to boost sales, Skyrim doesn’t feature any online multiplayer.

The other big release last week was Activision’s Call of Duty: Modern Warfare 3, which came out Nov. 8. The game sold 6.5 million copies in the first day, earning more than $400 million. At launch it was only available in North America and the United Kingdom. While Modern Warfare 3 has a single-player campaign, the game is primarily bought and played for its online multiplayer.

Skyrim is the follow-up to The Elder Scrolls IV: Oblivion, which released March 20, 2006 for the Xbox 360 and PC and on the PS3 exactly a year later. It shipped 1.7 million copies during its first few weeks of release. The game is considered critical to the early success of the Xbox 360.

Bethesda Studios’ last developed game, Fallout 3 for the PS3, Xbox 360 and PC, shipped 4.7 million units during its first week in the fall of 2008, earning more than $300 million.

Check out gameplay footage to see how you can fight a dragon in Skyrim: