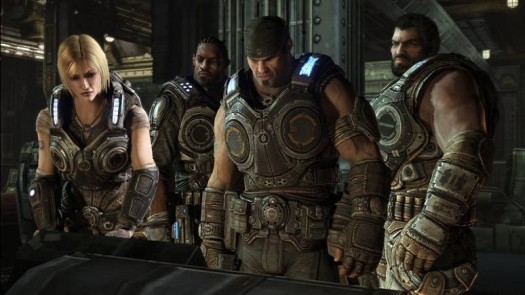 Epic Games, developer of Gears of War 3, announced the paid alternative weapon skin prices for the Lancer, Retro Lancer, Sawed-off Shotgun, Gnasher and Hammerburst, which players can download to show off in the game’s online multiplayer modes.

There’s 21 sets of weapon skins for each of the five guns. In total there’s 105 weapon skin varieties as paid downloads. These change the physical appearance of the weapon by altering its color or giving it a special animated effect. The DLC has no affect on the weapon’s usage or abilities.

These weapon skins are available day-one when Gears of War 3 releases on Sept. 20 exclusively for the Xbox 360. Rod Fergusson, director of production for Epic Games, revealed the prices during a live Q & A stream yesterday.

To buy all 105 weapon skins, players can download the “Launch Collection.” The Launch Collection has all 105 skins bundled in one pack and will cost players 3,600 Microsoft Points, or $45. That’s almost the cost of the entire game. The standard edition of Gears 3 will retail for $59.99.

Fergusson said $45 is the discounted price for all the weapon skins, as buying them separately would cost more than 5,700 Microsoft Points. According to Fergusson buying the Launch Collection gives players 37.5 percent in savings.

Some of the skins included are rainbow, tiger stripe, thunderstorm, oil slick and pink flower, according to MTV Multiplayer.

These weapon skins also aren’t part of the “Season Pass” downloadable content bundle for Gears of War 3 that is available to buy at launch for $30. The Season Pass content includes the first four “main” DLC releases which start in November. With the Season Pass and Launch Collection bundle, it will cost players $75 for all the announced downloadable content, more than the cost of Gears 3.

These weapon skins are items that were most likely completed several months ago during the game’s development. Gears of War 3 was originally set to release in April but was delayed last October for five months to coincide with the holiday season, not for quality purposes. Fergusson confirmed these skins are already on the game disc at retail. He said it’s so all players, not just those who download the skins, will be able to see them during online multiplayer matches.

While these downloadable weapons skins are completely optional and players aren’t forced to buy them to finish the game, many players and diehard Gears of War fans are angry at the decision and pricing. The Epic Games community message board has filled with posts over the past day discussing the controversy.

Many feel the content should have been free in-game unlockables since the skins are already included on the disc. Others believe that players are being charged ridiculous prices for something purely cosmetic that doesn’t add real gameplay content to the game. Some feel that Microsoft and Epic Games are being greedy and taking advantage of players by pushing downloadable content to unnecessary extremes.

In contrast to the different weapon skin prices, the “All Fronts Collection” downloadable content for 2008’s Gears of War 2 cost 1,600 Microsoft Points ($20) when it released in July 2009. The All Fronts pack came with 19 multiplayer maps and a deleted campaign section called “Road to Ruin.”