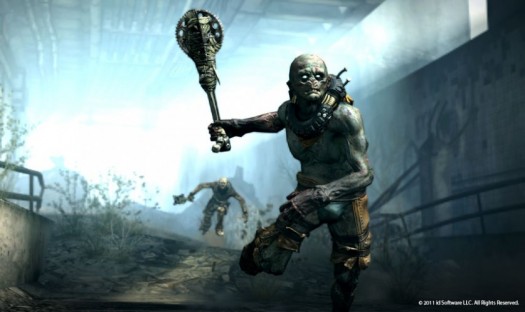 RAGE, the upcoming first-person shooter from id Software, will have specific content unlocked for new buyers.

Tim Willits, creative director for id Software, told Eurogamer that content already on the disc from the single player of RAGE will be locked out to players who buy a used copy of the game.

Used buyers don’t get blocked out of RAGE’s online multiplayer like other games that try to discourage used sales with online passes. Instead players that buy a new copy of RAGE get a code with the game that gives them access to sewer levels within the single player. The sewer hatches are sidequests that will give players new missions and enemies to fight. Willits tried to downplay the content’s significance and said:

If you bought the game new, that would be open for you. You still have to download it, but you don’t have to pay for it. Those hatches are all over. Most people never find them. But as soon as you do, you’re like, oh. And then you start to look for it. That’s our first-time buyer incentive.

But as you can tell, most people never even see it. I can tell you, some people will buy Rage, download that, and still never set foot in those things. They just won’t. I think that’s fair. It’s cool. It’s outside the main path. We’re not detracting from anything. But I know some consumers, when you can’t avoid it, then you get a little touchy subject.

Those who don’t have the code won’t be able to enter any of the hatches in the game. It wasn’t confirmed if multiple people on the same system or those that borrow the game would be able to reach these sewer sections. Willits also didn’t say if the code would be for sale on the PlayStation Network Store or the Xbox Live Marketplace.

Even though used buyers do get content removed from RAGE’s single player, when asked if games in the future will be broken up into different parts requiring redeemable codes, Willits said, “I don’t see that any time soon. Again, as long as you buy Rage new you get everything free. We’re not taking stuff out.”

Although RAGE won’t include always-online DRM like Diablo 3 or other PC games that don’t allow players to use their games offline, Willits is also a supporter of that system. In the same interview he said, “I’m a big proponent of always connected. I’m always connected. Our fans are always connected.”

Discussing the DRM in the upcoming Diablo 3 Willits said, “I’m all for that. If we could force people to always be connected when you play the game, and then have that be acceptable, awesome.” He continued to say that always-online DRM is good for everyone:

But really, in the end, it’s better for everybody. Imagine picking up a game and it’s automatically updated. Or there’s something new you didn’t know about, and you didn’t have to click away. It’s all automatically there. But it does take juggernauts like that to make change.

For those that disagree with that method of DRM Willits said, “There will be a few people who will resent the fact you have to be online to play a single-player game. But it’ll change.”

RAGE is using an all-new game engine called id Tech 5 developed by id Software. The game is being published by Bethesda Softworks and will release Oct. 4 for the PlayStation 3, Xbox 360 and PC. RAGE will retail for $59.99.