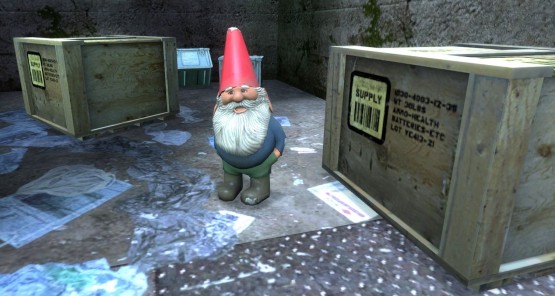 The “Little Rocket Man” achievement in Half-Life 2: Episode 2 is a unique affair rarely seen in games.

Released in 2007, Half-Life 2: Episode 2 is the rush to White Forest to launch a missile into space to stop the upcoming Combine invasion. The missile would disrupt the Combine by sending out vital information that would close the super portal being formed for their next massive arrival. The Combine reinforcements could eliminate the final traces of the human race, which had just gained a major victory in the war.

For the achievement, the player must bring a garden gnome all the way to White Forest and place it into the missile. The player must use the Gravity Gun to carry the gnome. “Little Rocket Man” starts near the beginning of the game. The gnome can be found hidden under a shelf in one of the early buildings where Alyx Vance and Gordon Freeman try to establish a communication connection to White Forest.

Later on in Valve’s 2009 zombie apocalypse Left 4 Dead 2, the gnome returned for another difficult achievement. He was also given the name “Gnome Chompski.” The name is a play on Noam Chomsky, the famous linguist and philosopher.

Since it was my first play through of Episode 2, I was hesitant to bring the gnome along for the ride. Carrying around something for the entire game seemed like it would ruin the experience. I was dead wrong.

For the first hour or two, it was smooth sailing. It was a simple process; pick up the gnome, walk around. Enemies appear, put him down. Kill some baddies, pick up the gnome again. Rinse and repeat. The gnome was also useful as a projectile against enemies, coming through during a surprise attack or when ammo was low.

Speaking of the enemies: the Zombies. They yell. They crawl. They kill. When they’re on fire, you can feel the torture in their screams of agony. Are they still alive? Are their souls trapped in their mangled bodies? I often wondered if Mr. Gnome would express himself the same way if given the opportunity.

The zombies often whipped the gnome back at me, which did a considerable amount of damage for someone of his size. My immediate reaction was to have some sort of Curly and Moe moment from The Three Stooges with the gnome. That wouldn’t get me anywhere. Instead I got my revenge by shooting him right back into the Zombie’s face. Take that, gnome.

Tensions grew going into the antilon cave. The large tunnels were surrounded in darkness and riddled with never-ending gapes. The antilons aggressively attacked the gnome, slapping him around and out of my reach. Diving into the water to advance through the tunnels posed a new challenge. Can the gnome swim? Can he even hold his breath? I then came to my senses and realized I was rationalizing about a garden gnome. The line between reality and fiction was deteriorating at a rapid pace.

Exiting the tunnels, Alyx was on the brink of death in the resistance hideout. The vortigaunts were coming to save her, but not before the antilons bombarded the hideout. Only a handful of turrets and two resistance fighters aided in our struggle. Hoards of antilons came from every angle. They knocked over the turrets, which sent bullets flying in every direction. The gnome just hung out near the turrets, watching the chaos unfold. When the fight was over, the vortigaunts explained they needed the antilon larval extract hidden deep in the caves to fully heal the Alyx Vance. 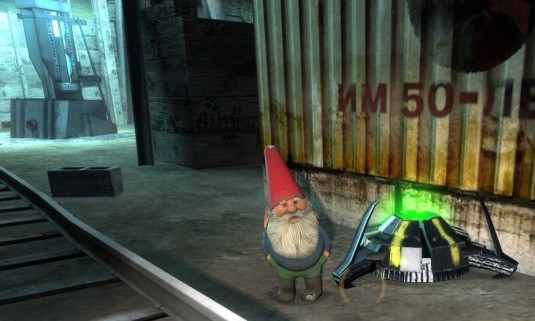 I left Mr. Gnome posted up near the entrance and headed back into the tunnels with a leader of the Vortigaunts. I hoped the gnome would be there when I returned. During our trip the vortigaunt said, “No pit is complete without a Freeman coming out of it.”  I would have to make a small change to that. “No pit is complete without a Gnome coming out of it.”

The extract was taken and we returned to the hideout. With Alyx saved, it was back to carrying around the gnome as we inched closer to White Forest.

Then the driving came.

Freeman and Alyx discover a car to help speed up the journey to White Forest. Awesome! Instead of walking, we got wheels! I was getting tired of lugging around the gnome anyway. I quickly discovered there was only one problem:

The little bastard wouldn’t stay in the car, no matter how hard I tried. The car had seen better days. It had no doors, windows, windshield, or any sort of closing that would keep things in or the unwanted out. Every few feet Mr. Gnome would fly out of one of the openings. Like leaving something important on the hood of your car and driving away, the gnome’s absence was only noticed when it was too late. The slightest bump or turn would cause a massive headache.

Why won’t you just stay put?

Driving at a snail-like pace was the only solution. Even then, the gnome would still periodically disappear, which forced me to scavenge the land for him. It was an extremely slow and painful process. Our relationship was already on the rocks, but his refusal to cooperate turned my frustration into rage.

As we ventured on, a Combine helicopter appeared to cut our journey short. Out in the open, the helicopter dropped bombs everywhere, mostly on the gnome’s head. The gnome bounced around like Flubber. The helicopter’s turrets ripped into my flesh, almost causing an instant death. I realized there was no way I could drive all the way through those broken down train cars and vehicles while keeping the gnome in the backseat.

Maybe I should just forget about him and go it alone.

After making it that far, I just couldn’t do that. The only way to advance was to blast the gnome into the air down past the trains, towards the tunnel entrance. Sorry buddy. I yanked him close with the Gravity Gun and threw him down the path so perfectly that even Tom Brady would be jealous.

As he flew through the air, I quickly hopped back in the car and drove to where he landed. Like an Olympic challenge, I picked the gnome up, immediately shot him in the air, and dashed back to my ride. After repeating this a handful of times, we made it to safety. However, relief was short-lived.

The Combine helicopter soon returned to finish off the Freeman and his bearded partner. This time, we were ready for the challenge. Explosions ripped everywhere during the fight. Structures collapsed from the continuous bombing. Resistance fighters fell lifeless to my left and to my right. Somehow, the gnome persevered. The battle finished with fireworks in the sky, and our journey continued.

As we inched closer to White Forest, the mess of radioactive debris appeared. Since he refused to cooperate and stay in the car, the gnome fell into the radioactive sludge over and over again. Unlike Gordan Freeman, Mr. Gnome didn’t have a special suit to protect him from those environmental dangers. Not even the determined Zombies could make it out of that abyss. The gnome was in there for several minutes as I tried to search him out with the Gravity Gun. His risk of cancer shot through the roof. Like the trooper he was, the gnome pulled through. Time was running short, so we ventured on.

Finally, White Forest. I rushed to the missile after some small talk with Eli Vance and heavy pestering from Dr. Magnusson. After hundreds of battles, both the gnome and I are seasoned warriors. Countless Combine and Zombies had fallen to our strength. It was time to bring our mission to a close.

The gnome went into the rocket with Dr. Kleiner’s headcrab pet, Lamarr. Unfortunately for the gnome, it’s nowhere near as gorgeous as Hedy Lamarr. I could tell it was going to be a long, long flight for Mr. Gnome.

After defending the missile base from waves of Striders and Hunters, it was time to send the space man on his flight. Dr. Magnusson and company gave me the honors to hit the switch. Hesitation crept in, knowing who was inside the missile. I pressed the button.

The timer began to count down.

You know, maybe he wasn’t so bad after all.

Wow, this is really it.

Lift off! Not knowing if the rocket would make it to orbit was nerve-wracking.

After several tense moments, Dr. Kleiner and Dr. Magnusson announced….success! The human race was momentarily saved from the Combine. Even though I just secured the future of the human race, I couldn’t help but feel a little empty inside.

It’s incredible that a hidden environmental object could have such an impact on Episode 2’s overall gameplay experience. The gnome isn’t part of the story. He has no character growth, no lines of dialogue, no actions besides the nonchalant way he puts his hands in his pockets. He has no other facial expressions besides a constant goofy grin. Not one character in Episode 2 even acknowledges his existence.

Many write off achievements and trophies because they’re given out too easily and frequently. Often no thought is put behind them during a game’s development. You can earn them by pausing the game, completing a simple tutorial, or killing needless amounts of opponents online. Little Rocket Man is bizarre and extremely challenging. This achievement added an entirely deeper dimension to Episode 2. It enriched the whole game, something most achievements could only dream of doing.

During Episode 2, the G-Man commands Alyx to tell her father this dire warning:

Now, the G-Man was talking about Eli Vance’s fate, but maybe I should’ve listened to him too. The experience was worth so much more than the 30 achievement points. Wherever he is now, I know the little rocket man is looking down and smiling.

One Response to “Bonding with a Garden Gnome”