The creators of the original Bioshock are returning to the series-this time in the sky.

At an event in Manhattan’s Plaza Hotel on Wednesday, Irrational Games (formerly 2K Boston) announced Bioshock Infinite for the Playstation 3, Xbox 360, and PC.

A trailer and demo were shown at the event. Bioshock Infinite is Irrational Games’ first project since 2007’s Bioshock. Infinite also takes place in an entirely new location. Levine said:

We’re not in Rapture anymore. It’s the city of Columbia- not a secret city hidden underwater, but one lost up in the air.

In Infinite you play as a former member of thePinkerton National Detective Agency, Booker DeWitt. Pinkerton agents were part of a private security and detective organization founded in 1850.

DeWitt is a man who’ll do anything for the right price. He’s looking for a woman named Elizabeth, who was kidnapped and has been imprisoned in Columbia for 15 years. A mysterious man contacted DeWitt to rescue her, and DeWitt is sent to Columbia to find Elizabeth, according to Gamespot.

Created in 1900 by the United States government, Columbia is an example of American achievement and superiority. It does have some dark secrets though.

“This is not a floating world’s fair. Columbia is a Death Star,” Levine said during the event.

Unlike Bioshock 1 and 2, this is a country’s vision, not an individual’s dream of a utopia, Levine told Eurogamer.

The city floats on propellers and hot air balloons. It was supposed to be a paradise, but soon an international affair set the hopeful utopia into chaos. After that, Columbia disappeared into the sky, hidden from the rest of the world for ten years.

Elizabeth is in center of this incident, complicating DeWitt’s mission.

Infinite features a much more open environment than the last two games. There are railways in Columbia called the Sky-Line, which DeWitt can ride on for transportation and use for combat.

In combat, abilities and weapons can be chosen simultaneously. Elizabeth also has her own special powers that can aid you in battle, although she’s not controllable by the player.

Not all the enemies will be immediately hostile towards you like in previous Bioshock games. Levine stated enemies and the environments will have a “Wild West” feel, giving players a variety of different enemy and combat situations. reported CVG.

Enemies similar to Big Daddies are called “Alphas,” according to MTV’s Multiplayer blog. 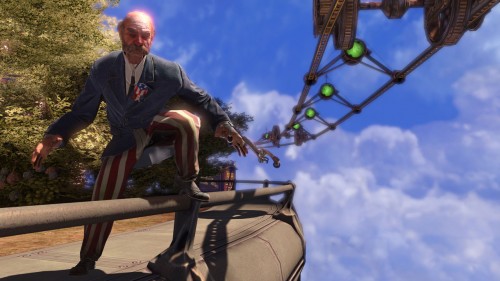 BioShock 1 wasn’t historical, but it was set in the context of history. There was a feeling in America that we were trying to represent. And very much the same here. At the turn of the century, there was this feeling of optimism. All these technologies came in place in the span of twenty years. You go from people with cows and outhouses and growing wheat in fields, to having radios and cars and movie stars, and all these incredible things. It’s almost as if they felt a city was suddenly floating in the sky. That’s how much the world had changed…..

This feeling of optimism — we can do all these huge things — we have the technology, we have this incredible democratic system, which really was a beacon of hope at the time. It was a world filled with monarchies and despots. And Columbia [Ed’s note: fictional city of Infinite] came out of that. We really wanted to base something on that time, which people haven’t really seen before, but also, in a lot of ways, feels very familiar to some things that are very much in our consciousness today.

Levine refused to comment on the connection to the two previous games or Infinite‘s relationship to the Bioshock universe of Rapture.

Bioshock Infinite is scheduled for a 2012 release. An official release date has not been set. The official site can be viewed here.