Kool-Aid Man meets all the criteria for the worst example of product placement in games.

According to Hugues, General Foods contacted Mattel to quickly release a game in six months to coincide with a marketing campaign. There are two different versions of the game, one for the Atari 2600 and the Intellivision.

You could get the game “free” by sending in a whopping 125 proofs-of-purchase.

In the Atari 2600 version, “Thirsties” are trying to drink all of a pool’s water. You quickly have to catch them with a Kool-Aid pitcher before all the water disappears. 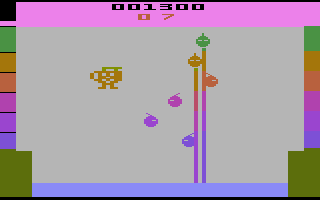 The Intellivision version is completely different. It’s “very hard to see how this game has anything to do with Kool-Aid,” said Hugues.

The goal of theIntellivision version is to collect Kool-Aid ingredients scattered around a house. You play as two kids trying to find all the ingredients to make a batch of Kool-Aid. Thirsties try to stop you before you can get them all.

Once you collect all the ingredients, Kool-Aid Man busts through the wall. The Thirsties become edible, and you have to beat them all to clear the level. There’s a ten minute timer to get everything done.

Kool-Aid Man for the Intellivision is an eye sore. “If you were colorblind you cannot possibly play this game,” said Hugues.

Mattel owned the Intellivision and tried to make it superior to the 2600 game, said Hugues. Ironically, the Atari version turned out to be the “better” of the two. That’s not saying much.

Don’t forget, be sure to check out the Retro League Podcast for a heavy dose of retro gaming goodness!

3 Responses to “The 5 Worst Product Placements in Video Games”